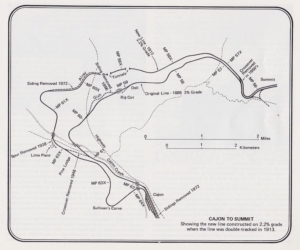 Discussions of the railroad operations and history of Cajon Pass, California, and the scale modeling of Cajon Pass, which is located between San Bernardino and Victorville, CA.  The railroads involved are the BNSF, the Union Pacific, and the former Santa Fe and Southern Pacific railroads.  Topics often expand to cover Southern California railroading in general.  Most of the interest is in the post-WW2 decades and in the Santa Fe Railway.

Due to limitations in the modern group environment. the Cajon Pass Group asked, and the Society agreed, to host certain files to make them more widely accessible to fans of Cajon Pass and the Santa Fe.  Individuals interested in participating in the group discussions are encouraged to join the group at the link above.

The Historic American Engineering Record prepared the following article about Cajon Pass, which was found by Larry Occhiello and passed on to the group and Society:

Plats are surveys showing the lay out of the right of way and various stations and places along the Cajon Right-of-Way.  This section includes the following plats, arranged generally from west to east:

Drawings are blueprints or other drawings of structures in the Cajon Pass area.

This section includes a map of Cajon to the Summit and of the various bridge locations, plus some photos of bridges and culverts.  Some images courtesy of the Historic American Engineering Registry.  Some Santa Fe Railway.

Michael Davis and John Parker have created indices of images of locomotives, rolling stock and structures that often appeared on Cajon.

This is information compiled by Cajon Pass members, including John Thompson, Don Borden and Andy Sperandeo, about trains and car blocks passing over Cajon Pass.  It is updated as more information becomes available.