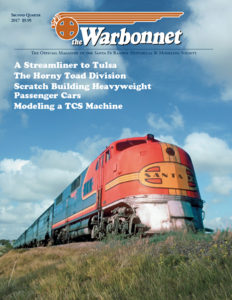 The Society and its predecessors have been publishing information about the Santa Fe since 1969. The Society offers exceptional publications on the history and modeling of the Santa Fe. From its flagship quarterly magazine, The Warbonnet, to its comprehensive books on history, motive power, rolling stock and modeling, the Society is the definitive and authoritative source on all things Santa Fe.

The Society’s flagship quarterly magazine, The Warbonnet, offers lavishly illustrated articles on the history and modeling of the Santa Fe and its affiliated companies. Each issue is at least 40 pages, often more, typically includes articles by noted authors, often accompanied by full color photos, maps and drawings; modeling articles with useful “how to” tips; letters from Society members contributing additional information on past articles, and product reviews. Issued in March, June, September and December of each year. Under its current editor, John R. Signor, The Warbonnet has never missed an issue or a publication window! Members receive The Warbonnet at a discounted rate.

The Society’s quarterly newsletter, Running Extra, features Society news to keep members up-to-date on new books, products, minimeets and other aspects of Society operation. It also features the Santa Fe Challenge – an opportunity to test your knowledge of Santa Fe history against other members, Questions and Answers collected from the Society’s forums but judged of general interest, and an ever changing mix of short articles on research, history and employee anecdotes of their lives on the Santa Fe. The Running Extra is typically 8 pages issued quarterly in conjunction with The Warbonnet. Members receive the Running Extra as part of their membership.

Each year, the Society strives to bring out one to three books about the history or modeling of the Santa Fe or reprints of significant company documents. The Society has published these books in several series of interest to both railfans and modelers alike. Members receive these books at a discount, typically 20 percent. The major series are:

Click here to learn more about the Society’s Book Project and the individual books that comprise each series.
Click here to browse and purchase Society books, and much more!

The Society depends upon members, scholars, modelers and interested members of the public to support its publications by sharing manuscripts, photographs and historic documents that bring to light the history and legacy of the Santa Fe and its modeling.  If you can support these efforts please contact:

Requests for permission to reprint Society materials should be directed to Eric Hiser.