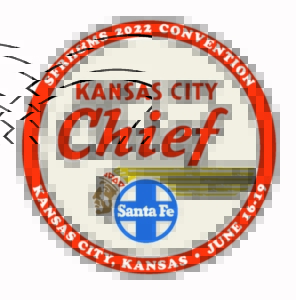 Nearly 200 Santa Fe historians, modelers and fans gathered at the DoubleTree Hotel in Overland Park, Kansas on June 14-19, 2022  to celebrate the enduring legacy of the Santa Fe.   There were many highlights at this year’s Convention over and above the excitement of getting back together in person after a two year hiatus.  Special features included:

A Friday Night Talk on the ATSF 5704 Restoration Story by Stephen Priest and Mike Brusky.  Steve and Mike talked about the great cooperation from the BNSF Railway in agreeing to preserve the locomotive, prepping it for movement and then getting it to the shop for restoration; the commitment by the Southern California Railroad Museum to serve as a permanent home, which encouraged the BNSF Railway to make the donation, and the countless hours put in by both professionals and volunteers to restore 5704 to its full Bicentennial glory.  And what a success it was!

Clinics at the Convention covered a wide range, including:

An added benefit was Andrew Bobis and his Santa Fe All the Way! modules that was set up and operating at the Convention Hotel Thursday through Saturday.  Great modeling and details in a modular format.

Extra Fares that many attendees took advantage of included:

Attendees took Amtrak #4 to LaPlata, Missouri and enjoyed train watching from the platform.  After a pleasant time, everyone boarded buses and went to Marceline for lunch and  a tour of the Disney Museum.  An exciting addition was seeing some Santa Fe equipment still in livery.

The destination was the Santa Fe depot and Harvey House museum in Ottawa and they did not disappoint.  Lunch at Ward Meade Park in Topeka followed by a visit to the restored Pauline depot and caboose. Attendees then went down to the Topeka depot and a view of the “returned merchandise warehouse” scheduled for demolition. A definite highlight of this trip was a trip around the BNSF Shops and visit Eastfield Yard. On the way back to Kansas City, the buses stopped for a much appreciated visit to the restored Santa Fe depot in Lawrence.

Thursday promised to be a big day with both a bus tour through historic Argentine Yard – in many ways one of the beating hearts of the Santa Fe system guided by former employees.  Historic sites were pointed out, changes discussed, and application of the retarders on the hump studied in detail before everyone reluctantly agreed to move on to Logistics Park.  Logistics Park, the last of the Santa Fe’s big new facilities was phenomenal with all the accoutrements of modern intermodal railroading, of which the Santa Fe was a major pioneer.  It was great to see that BNSF Railway is keeping up the spirit with heavy traffic, even bigger cranes, and an intriguing new automation system.

Designed for spouses, but we won’t say anything if a few attendees found them irresistable as well!  Two trips great trips were available.  The first a tour of Leavenworth, Kansas visiting the Harvey House Museum, followed by lunch at the Old Santa Fe Depot Diner, and then some time to spend in the pleasant Leavenworth historic downtown.  The second trip was a bus to the iconic Kansas City Union Station.  Everyone checked out the Harvey Girls tour.  The tour was followed by a pleasant time shopping or lunching at Crown Center.

Thanks to Convention Chair Mike Tomei and his committee for a great convention!