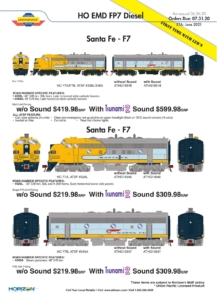 The Santa Fe’s Yellowbonnet scheme was the result of the FRA Visibility-Audibility study conducted from 1970 to 1972. The recommendation to the Santa Fe was “put more yellow up front”. In an effort to improve highway/railroad grade crossing visibility, Santa Fe standardized on the Yellowbonnet paint scheme for its diesel locomotive fleet in mid-June 1972.

Thanks to member Ralph Back for the writeup.  Images courtesy of Athearn.