This page collects many of the standard and special forms used by The Atchison, Topeka & Santa Fe Railway in the operation of its business.  They are preserved here to assist Society members with research, modeling and operations interests. 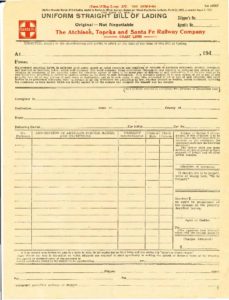 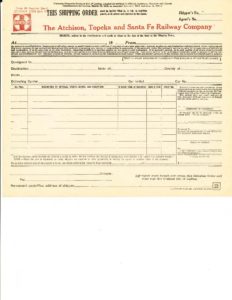 Form 18 Small.  Uniform Domestic Straight Bill of Lading-Shipping Order.  The Atchison, Topeka & Santa Fe Railway Company.  Approx. 1922 to 1940.  This form was used by shippers to place orders for cars and a Uniform Bill of Lading and Waybill could be produced from it.  A full copy of the form is available in PDF. 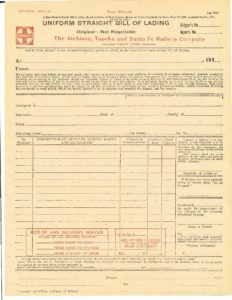 Form 18 Special.  Uniform Domestic Straight Bill of Lading.  This form was used on the Coast Lines for shipping to territories covered by the Official, Southern, Western and Illinois Classification territories.  It was used approximately 1941.  The full form is not yet available in PDF. 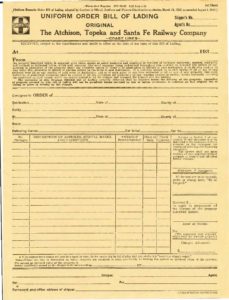 Form 18A Uniform Order Bill of Lading.  The Atchison, Topeka & Santa Fe Railway Company, Coast Lines.  Approx. 1935 – 1940s.  This “Order” was used by a shipper (consignor) to send merchandise to a purchaser (consignee), but the railroad would not deliver the merchandise to the consignee until the consignee provided the original Order Bill of Lading.  The full form is available in PDF. 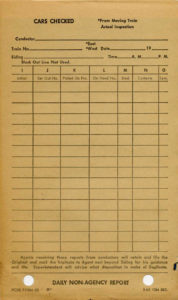 PCDB Form 62.  Daily Non-Agency Report of Cars Checked.  Approx. 1963.  This form was used by conductors dropping or picking up cars at non-agency stations (e.g., stations without agents physically present) to inform station agents and clerks in the Pacific Car Distribution Bureau territory on the status of cars at the non-agency station.