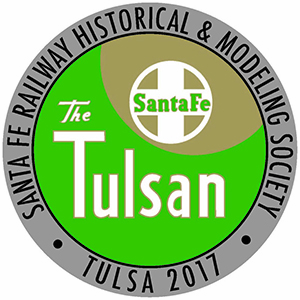 The 37th annual Santa Fe Railway Historical & Modeling Society Convention was held for the first time in Tulsa, Oklahoma, on June 21 – 25, 2017. Fittingly, our theme was The Tulsan, which was a Tulsa to Kansas City streamliner with connections to and from Chicago.

Some photos of our Extra Fare trip:

The Society had another good showing in the model and photo contest.  Below are photos of members judging some of the entries (popular and technical votes), a model of the Bartlesville, Oklahoma depot we saw during the Extra Fare trip (model by Kevin Looff).

Click here to see photos of all the award winning models at the 2017 Tulsa Convention!

The Society gathered for its annual awards banquet on Saturday night.  Both Santa Fe and BNSF modelers and photographers were recognized for their efforts.  Raffle prizes were distributed.  The Society then honored its members enrolled on the Perpetual Roll of Honor.  New honorees in 2017 included Denny Krausman and Ian MacKellar as Master Santa Fe Modelers; Douglas J. Watts as Honorary Life Member for service to the Society; and Dennis J. Kogan received the coveted Lifetime Achievement Award for his work on the Santa Fe’s lightweight passenger fleet (and auxiliary details).